Spring is in the air, as I was reminded the other night when I caught my husband, a die hard Yankee fan, doing his fantasy baseball draft during dinner.  For the next 6 months I will lose my husband to the sport we call America’s Pastime.

It’s no secret that my husband is a baseball junkie.   He has been collecting baseball memorabilia from the time he was 12 years old.  During his summers growing up in New York City, he would take the train to Yankee Stadium and wait outside the stadium at 1 pm for a 7 pm game, because that is what time the players would arrive. He would be there, without fail,  with a bag of baseballs to have signed by the players making their way from their cars to the stadium.

While we lived in New Jersey, my husband lined the walls of our home gym with everything baseball, but since moving back to Pasadena, where space is a premium, we had nowhere to put his treasures…until I came up with the brilliant idea of incorporating the baseball collection into my oldest son, Big D’s room.  He had no choice but to settle with a bedroom filled with baseball memorabilia. Either baseball or keep the “peptol bismol” pink walls that were there when we moved in.  Lucky for Big D we weren’t talking just any baseball, we were talking  NY YANKEE baseball (ok, and maybe one Boston Red Sox  bat signed by Ted Williams. I know – such a travesty, coming from a die hard Yankee fan like Ray.)

Not only did Big D get a room full of baseball memorabilia, but he also cashed in with a nice leather sofa bed, since we no longer had room to put that anywhere else in the house either. With the sofa, we created a lounge area, complete with a nice, warm Persian rug and a TV to play video games with his friends.  Surprising, the TV NEVER gets turned on, perhaps because we don’t have cable or satellite tv.  I can’t even remember the last time it was turned on – October, if I’m not mistaken. It’s all about reverse psychology  – you make it readily available and then they don’t even think twice about it. Brilliant parenting on my part, right? 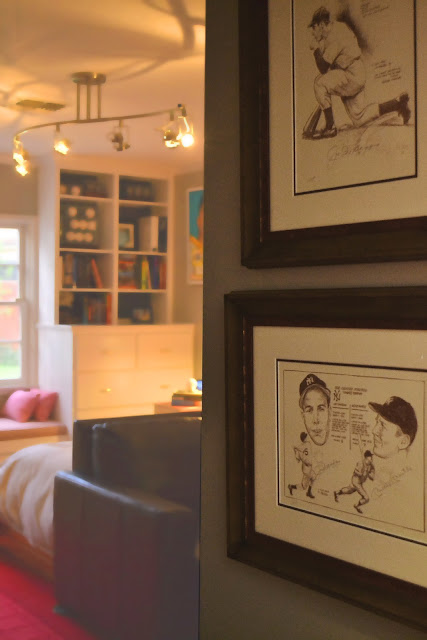 The entrance to Big D’s room

And  yes, that’s Big D with NY Yankees No. 2, Derek Jeter in Monument Park in the real “House that Ruth Built”, before it was torn down.

Big D’s room was done very quickly and on a very limited budget, since I only used what we already had and only purchased  3 gallons of paint and 2 cushions for the window seat (oh yeah, and about 6 different quarts of grey, because it took me a few tries to find the RIGHT grey).  I took furniture from my old office, the playroom, our exercise room, Ray’s office in NYC, I took apart Big Ds old bunk bed/drawer/desk contraption and consolidated everything into what you see in the pictures above. This room was meant to last until he leaves for college, but now that I’m a practicing interior designer and I am seeing so many cool things in the market…. Ugh, I can’t even think about it – my husband would KILL me!!!
It’s not easy conceiving a room for an eleven year boy that will last him at least 7 years.  I didn’t want it to be too juvenile, but at the same time, the last thing I wanted was Farrah Fawcett-type  posters on the wall (do boys even do that anymore?!?) Or do they put up posters of their favorite bands? I’m not even sure, but  I’d be curious to see how other teenage boys have their rooms decorated.  Send me pics, please – I’d love to see! But for now, a baseball memorabilia room is pretty cool.  A scantily clad Farrah or a smoking hot Jeter on the wall?  I’d say that’s a no brainer!
…And if you’re thinking of a baseball room for your own, here are some things currently on the market to get you started.